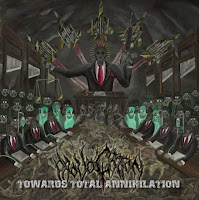 It's not often you get a death metal band focused on social and political subject matter, aside from Napalm Death and a few others that took their queue. Provocation does exactly this, instead of laying on the gory smackdown so many other bands settle for, or the occult/Satanic path.

How well they accomplish this is up in the air, for the majority of the album is quite boring chug/blast alternation with a decent production. A few songs like "Poor in Resources, High in Conflict" stand out from the rest with slightly better riffing, and they do have some cool bits like the trippy sampling of "Do We Learn to Perceive the Unity", but much of the rest I could completely pass on.

Alright, there is ONE bit of gore here, but it's a cover of Pyaemia's "Gorging on Mucus and Bile", and musically it fits right in with the rest of the album. While I'm excited there are bands out there who want to play death metal and convey it through lyrics that may bear some social relevance, the album doesn't quite succeed as a musical statement. However, they are young, this is only their debut, and the potential certainly exists here for better.