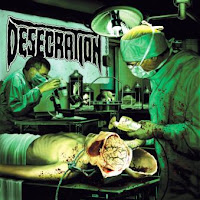 Veterans of the 90s UK death metal scene, this is now the 7th album for Desecration. Boasting two members of Extreme Noise Terror, Forensix has all the polish you'd expect, with a pro mix, excellent drumming, and busy riffs. Yet it never really capitalizes on all the talent behind it, and ends up another sort of middling brutal death metal record.

A lot of the same criticisms I have for other recent albums of this genre (Dementor and Queiron, for example) apply here. There simply aren't any riffs worth remembering, no "holy fuck let me hear that again" that usually saturate or at least pepper a great death metal album. Sure it's brutal, these guys have some serious strength in their digits to pound these chords and drums like this. But it's never creepy, scary or morbid feeling like the best material by a Morbid Angel or a Cannibal Corpse. There was a riff in "Dissecting the Departed" which started to get me rocking until it just erupted once more into boring start/stop blast monotony. I've felt this way about many of this band's albums, sadly. The fact that vocalist/guitarist Ollie Jones is actually a mortician does little to help affairs.

Average death metal here, nothing more. I don't want to pick apart a band who has an obvious passion for their style to stick to their slabs thick or thin, but half the time I hear albums like this they feel phoned in. The legacy of Carcass and Bolt Thrower yet looms, just waiting for someone to come along and snatch up their twin thrones. So someone snatch them up already, for fuck's sake! Or else I'm giving them both to Mithras.