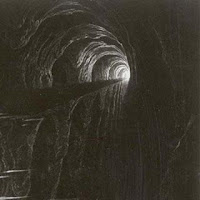 This material is actually part of a split with Bosque, but I really don't care about the other half. Here we have Senthil's second release, and the first obvious thing about it is that they've cleaned up their sound. Gone is the recorded-in-basement-while-torturing-someone sound. The distortion on the guitars is much smoother, while the guitars themselves have been pushed further back in the mix. Drums are still a menacing presence, but likewise have been mixed in much better. Their trademark ululations are back with renewed vehemence. On the whole, this is what you'd expect of them with a more professional production. The progression here lies in subtle experimentation. Strange guitar sounds and ambient drones crawl through these two songs, rising to the surface momentarily to snatch bits of your mind away. Small touches, but when combined withe the better sound, the atmosphere becomes that much more engrossing.

Senthil have one more release after this (reviewed a while ago on the old PA.fm blog) that takes this new focus on low-key atmosphere even farther, adding prevalent synths to their increasingly polished sound. I'm hoping they keep going with that and move into even more ambient territory, since I can imagine them making some absolutely disturbing mindfucks in such a style, but the Premeditation songs remain my favourite thus far. The mix of urgency and atmosphere makes for a killer trip, one that extreme doom fans should not miss.