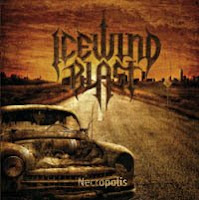 I admit when I see a band's name being Icewind Blast I am obviously expecting a bunch of Immortal clones who worship those Forgotten Realms RPGs which came out a few years back for PCs. Not the case with this album. Hell, I don't even see anything grim and wintery on the cover, it looks more like a scene from The Stand or something.

This is the debut from a melodic death metal band out of Russia, who have a rather middle of the road, simple style with a lot of keyboards. Comparatively, their style falls closer to the Finnish bands Kalmah, Children of Bodom and Norther than the Swedish scene. Unfortunately, these guys don't have that frenzied pace which makes many of the peers of their genre so interesting, though they do try.

The production on the album is crisp, clear and in your face. Not always an easy thing to pull off with a keyboard player so prevalent in the songs, but it works here. The band are all competent musicians, vocal/guitarist Max Zalutskiy has a pretty average bark for this genre, not exactly impressive but suited to the songs. As far as the songs, most of them were decent, but few really stood out. "Burnland" is a pretty good track, and one of the more frenetic tracks on the album. "Where the Icy Wind Blows" follows suit, and "Coming to the Deadline" might just be my favorite, another track where they pick up the pace.

If you are really into that Finnish style of melodic death infused heavily with keys, this is a band to watch, but they really aren't at the level of their peers quite yet. However, they're not at all bad and there is no real downside to the album.