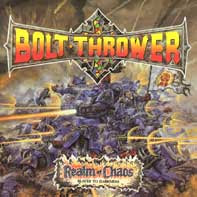 By the time 1989 rolled around, the world had already had its first few delicious tastes of the death metal. Chugging away in their English basements, war-gaming fanatics Bolt Thrower were slowly mutating the filthy, thrashing death hybrid of In Battle There is No Law into something more simple yet far more punishing. Slow-paced, down-tuned brutality, yet with occasionally forays into faster tempos and desolate grooves. Stir in the wargaming influence of the Warhammer 40K universe from Games Workshop, and you've got what is perhaps the first 'conceptual' masterpiece of the death metal genre, an album that has only rarely been surpassed, still standing today as one of the pinnacles of this extreme expression.

The vocals of Karl Willets created the perfect guttural helmsman to steer this war machine into its battles across an eternity of corpse littered alien worlds. The guitar onslaught of Thompson and Ward was never complex, it was determined to simply crush all hope, and weighed down by the plodding bass lines of Jo Bench and the drumming of Andy Whale, all hope WAS crushed. The album was the perfect accompaniment to the universe of its subject matter, and in return the sci-fi geek elements crossed this band over past the borders of the standard metal listener. Suddenly you were moshing out with the kid down the street who kept his nose in his books and dice most of the time. And it was cool! It still fucking is.

If I had to record the highlights of this album within the narrow boundaries of this review, it would be impossible. Just trust me that every song is damned unbelievable, whether it's "Plague Bearer" or "Lost Souls Domain". Sure "Eternal War" and "Through the Eye of Terror" may have had some of those famous grooves to them, but there is nigh a moment of imperfection across this bloodied landscape. It's a flawless expression of doom and gloom in a belligerent shell. This album is more doom than most actual doom metal albums. That it came candy coated with artwork from Games Workshop artists themselves was an idea born of brilliance, the two mediums converge in grisly harmony on this album. And while Bolt Thrower later would steer away from this precise subject material into other battlefields, it's not something that really needed repeating. This concept was mastered in 1989. Period.

Are you a poseur or not? There is no time for peace. Only eternal war.