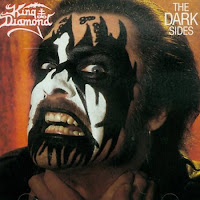 At the risk of losing all my hipster pull in society, I've recently been going through my vinyl to either sell off, give away or dispose of. I know, I know, I have been fully inundated into the digital era. It's a sad day in the life of autothrall.

Well, one of the gems I dug out of the bin was this 1989 EP by your favorite Dane, a six track collection of mostly 'rarities' and B-sides which the cool kids here in the States never had on our cassette copies of his earlier albums. And it's a smoking selection, even if most of these are now available on CD versions of the albums, rendering the EP itself worthless.

"Halloween" is a King Diamond classic, though it's the exception here since it was already released on Fatal Portrait and its own single a few years before this. "Them" is a creepy little narrative from the album of the same name. "No Presents for Christmas" is another staple song, it originally had its own single. I think he's performed this one every time I've seen him live. But the true gem on this EP is "The Shrine", one of my personal favorite KD tracks, which wasn't on any of my cassettes! An excellent track with a total LaRocque rock out riff, amazing vocal lines, and a desolate, moody bridge riff with Diamond's mid-range horror chokes. "The Lake" is another decent tune, not as good as the others here though. "Phone Call" closes off the EP, basically the final bit from Them. In fact you could think of this EP as a nice little promotional tool for Them and Conspiracy.

It's difficult to rate something like this, I'm giving it a Win based on its merits at the time of release, but these days you could easily skip it since you can get the tracks on CD re-issues of the albums. So, no need for it, but it was great at the time even if just to have "The Shrine".