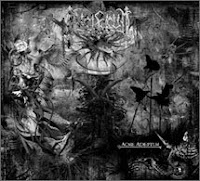 Lucifugum has got to be one of the only bedroom black metal bands out there featuring a married couple as the lineup. This is the 11th album from the Ukrainian kvltists, and unfortunately not one for the books.

The drum machine driving the snarling vocals and fuzzy guitar lines is my first issue, it just feels dead and lifeless, and yeah I know black metal SHOULD be dead and lifeless but I'm still a fan of the acoustic drums, unless a drum machine is programmed really well. Here it is only sufficient for syncopation, and actually detracted from my experience.

The riffing is quite prolific, there are some pretty complex and creepy lines being woven through many of the songs. They are probably the strong point of the album...with better drums and vocals they could really have something here. And that leads me to the vocals...they're not the worst I've heard by a longshot, but it seems like they are often in their own little word and only barely fit over the music. They don't embrace the necrosis of the music here, they exist off...to the side, in a parallel but inconsistent sub-dimension of evil.

Such a large amount of quality black metal these days makes it difficult to recommend this, even some of Lucifugum's past albums have been superior.