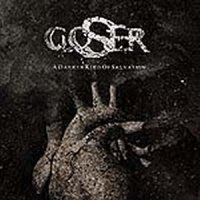 From the opening nearly math-chug groove of "Chaos Internal" I knew what I was in for. Another band carving their niche in the melodic death/metalcore crossover department.

This is the debut for Sweden's Closer, and to be fair they tackle this style with more flair and atmosphere than many. Clearly the songs are #1 for this band, and tracks such as "It Dwells in Darkness" and "What Am I" are more than enough to separate this band from the mountainous chaff piles of shovelcore stinking up the metal bins. I'd say these guys even use their synth presence and cleaner vocals to evoke a more 'gothic' metal approach. There is no lack of groove to the riffs, all fairly simple. You won't hear many blazing solos or attempts to blow your mind with technical proficiency. But the solos ARE there, and they are tasteful.

These are almost pop songs in a chugging metal shell. That's not always such a bad thing when you're reeling from an excess of pure aggression. But Closer does have enough of that trendy 'jump da fuck up' in their sound that I can't easily recommend this album, the quality of the tracks is inconsistent. I am partial to "Caressing the Insane" for its great thrash riffing and almost Mnemic/Meshuggah composure during the breakdown.

If you want some groove in your tunes, and some synths, and atmosphere above all else...let's say you're not shy about the recent Soilwork albums...then this is a band well worth your time. Otherwise keep away.