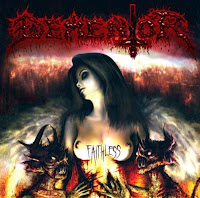 Slovakians Dementor began their brutal warpath 20 years ago, this is their six full-length album and offers more of the same brutal chug to blast alternation you expect from a school of death meal akin to the sounds of Hate Eternal, Vile and others talented enough to just barely raise their hacksaws above the crop of faceless, brutal gore soaked masses choking this style of its life since the mid 90s.

That is to say the album delivers what is expected of it, but little more. It's brutal, it's fast, it's got enough of a technical element to spin some heads. None of the individual tracks really stand forth, it could be a single song and I wouldn't know the difference. Okay one song is called "Kettle of Evil", and I like that. The name of the song, at least.

If you're one to salivate over every brutal death metal record to come down the pipe, with little interest in dynamic and interesting songwriter or any sort of actual evil vibes to the riffs, this is probably another in a long line of average releases you will relish. If not, skip it.