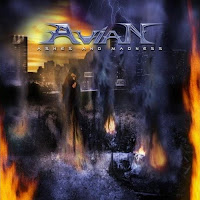 Avian is a US melodic power metal band featuring the prolific Lance King (of Pyramaze, Balance of Power and others) on vocals. His presence is quite a bonus here, because he is able to elevate some average 80s-influenced metal tunes into something soaring, i.e. the avian of the band's namesake.

That's not to say I was exactly blown away by this release, but if you enjoy his work with Pyramaze or other, mid-paced, simplistic power metal with a lot of melody and a central focus on the vocals, or even 80s metal like the US Warlord, Fates Warning or Apocrypha, then you'll likely enjoy it.

Most of the songs move at a fairly slow pace, this isn't quite the European anthemic style many have gotten used to. It's deeply entrenched in the 80s. I found "Never Fade from Me", "Into the Otherside" and "Beyond the Hallowed Gates" to be some of the catchier numbers. Solos are provided by Bill Hudson, formerly of Cellador, and this band has had some interesting members in its past, like David Ellefson (ex-Megadeth).

I'm afraid there's just not a lot riding on it without King's vocals here, but this isn't a bad sophomore effort for fans of classic metal in simpler times. The riffs may not stand up well on their own, but as a whole it's not bad. The production is decent too.