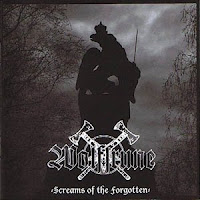 After a pair of demos in 2006, Wolfsrune now offer their first full length of primal German black metal. This is no bedroom band, they've got the full spread of members, but the simplicity of their compositions might trick some into believing so.

One thing that should be noted immediately is the vocals of Vasna. He's got a perfect snarl which really, really shines in the mix here. The vocals sound so good that they can almost make up for the areas the album is lacking in, which would be the drums and guitar riffs.

I can stand behind a return to the basics, but these riffs offer little in the way of interesting note processions. Most of them are extremely slow, with a narrow one-trick drum line that gets dull after a few moments. There are some moments where the pace picks up, but the riffs never do...and though this may have been exactly what Wolfsrune wanted, it doesn't really do much for me. Another gripe is I can't hear the bass guitar in here!? Maybe I'm getting old.

I do like some of their song titles: "Chains of Eradication", "Rhapsody of Fallen Angels", "Ghouls Havoc" and "Morbid Heart". So I kind of feel there is a creative force in this band that could really develop one day. And I do really enjoy Vasna's vocals, but nothing else.

is something strange that one of your favourite movies is amelie!
im from argentina,maybe you discover that because of my english.

Yes, it's a wonderful movie :)

Your English is fine.