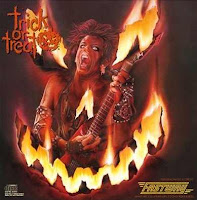 Let's just forget for a moment that this album is the soundtrack to one of the shittiest abortions of a holiday horror movie to ever foul up a cinema, and count it for what it really is: a kick ass, entirely fun hard rock record and one of the highlights of this band's career.

Fastway was the brainchild of Fast Eddie Clark (Motorhead) and Pete Way (UFO), sheer heavy metal dynamite featuring the high pitched, catchy vocals of David King (who currently sings for Flogging Molly, of all bands...). The songs are simple and fun, the lyrics are complete fucking cheese, but that doesn't matter, because this isn't about being about deep, it's about rock.

Yes, that same tongue in cheek irony rock thing that you see every time a kid picks up Guitar Hero or Rock Band. This album must have like a hundred utterances of the word 'rock' (akin to an early Saxon album), and for some reason, that's okay with me...because these tunes are so good.

The production, as with a lot of these big budget 80s hard rock records, is quite wonderful. A lot of space for all the instruments to thrive in, and while the vocals are very loud in the mix you can still make out everything else. The first quartet of songs on the album are all killers. The title track for the film is unforgettable. "After Midnight" just makes you want to pick up some big haired broad at the downtown diner and shag her in the bushes while stroking your mullet and chugging a can of Miller draft. Just keep your lighter away from that hair. "Don't Stop the Fight" is somehow more mellow and profound than either of these tunes, yet just as memorable. "Stand Up" has a great intro riff that reminded me of Saxon a lot. In fact, aside from the vocals, Fastway sounds a lot like that better known UK band, at least on this record. That can only be a good thing.