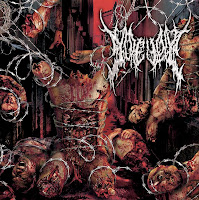 The debut full-length from this Japanese band is the very definition of the guttural stomp death that has clogged the arteries of the USDM scene for the past decade.

But they have no problem with this, as they churn out tune after tune of simplistic, slow chug often accented by tinny blast beats. To be fair, I like the production on the record, it's got a nice crunch to the guitars, the drums are very organic sounding and clear, and the vocals of Takashi just smother the entire affair in a brutal ooze.

It's difficult to analyze separate tracks on this entity since they all sound so much alike, but a few such as "Gallows" did make me want to jump up and do the ROFLSTOMP all over my room. None of these riffs are original, or even close. If you've ever chugged on the bottom four chords of your down-tuned guitar, you know exactly what this sounds like. The bass is present and distorted but never stands out in the songwriting.

I dunno, the album is pretty concise and tightly executed, it's just so simple and dull that there isn't much to get from it when there are so many better death metal bands out there writing more distinct songs. But if you have a fix for very simple, slam pit death metal and you have low standards, you may actually want to give this a shot.