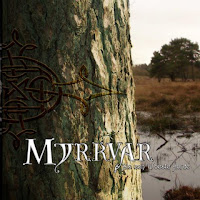 Ladies and jarls, I present to thee:

Where Viking metal came to die.

Try and imagine the very worst of Finntroll, Thyrfing and Einherjer scraped into a dull bucket and left out for the ravens to feed. But the ravens don't even want it, so they instead pick out your eyeballs in tribute to Odin.

Myrkvar is a Dutch band, a scene that is surprisingly lax in its pagan/Viking metal, despite its proximity to the ancient Scandinavian lands. Als Een Woeste Horde consists of nine tracks, none of which would be remotely interesting unless you sought the most pedestrian, simplest of 'folk' melodies, the very bottom feeders of the mead halls, songs so derivative and uninteresting that even Grendel's monstrous appetite wouldn't devour them on the worst of days. They could have actually saved their daughters and coin on Beowulf and just played Myrkvar at maximum volume out of the lodge's loudspeakers, and the dreaded beast wouldn't have come within miles.

Dumb mead hall chanting and pretty run of the mill snarls highlight the lackluster compositions. I don't have much of a problem with the production, it's simply the songs. This would be the 'everyman's' style of Viking/folk metal, except that every man does not want to be bored out of his mind. There are countless better bands out there performing this sub-genre. Your time is valuable to you. Go and listen to them instead.