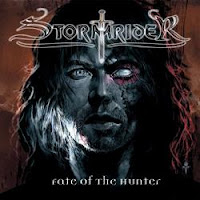 Germany's Stormrider is a band pursuing 'no frills' power/heavy metal rooted deeply in 80s tradition, driven almost entirely by the guitars and the charismatic vocals of Stefan Hebes.

Fate of the Hunter is their second record, and a good time all around, though it might take a few listens for some to adapt to Hebes' meaty vocals. Those of you into German power metal are very used to such distinct voices in your metal, though. Think Iron Savior, or Paragon, or older bands like X-Wild or Mania. That's the type of 'distinct' I am referring to, though Hebes doesn't sound identical to any of the above.

Another selling point for this record is the wonderful guitar work. The guitars blaze through the ten tracks with an unending series of talented licks. Often they would combine with Hebes vocals and remind me a little of Helstar, so we're talking about some gentlemen that know how to play their axes and do so with an obvious passion of the 80s Metal Blade school of thought.

If the album has one downside, it's that many of the songs sound quite similar. A few times I had to reference the play list as I thought I was playing the same song on repeat before the album had ended. In general, the quality is quite good. The production isn't too overdone, there is still a very natural, raw vibe to the album throughout. You won't find any epic walls of synths or orchestration here, this is all guitar and vocals at the forefront, so if you're looking for your latest Rhapsody clone turn away.

If you want some meaty, melodic power metal with balls, you could do a lot worse than Stormrider.

Posted by autothrall at 9:53 PM