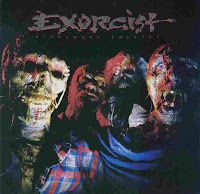 The sole album of this Virgin Steele project is, in my opinion, a prime example of when the side band eclipses the primary in quality. It's a shame that this was the only album officially released and we never got another, yet we've been buried in Virgin Steele albums over the years, only a few of which have ever been worthwhile. The fact that this material could have actually been a Steele album is amusing.

But this isn't about that other band, it's about Exorcist, the kick-ass one off. Unlike their alma mater, they let loose with a memorable album of filthy occult-laden speed/thrash metal. David Defeis vocals on this album, i.e. 'Damien Rath', are a killer cesspool channeling Lemmy and Chronos, and fit perfectly over the dirty speed metal licks of 'Marc Dorian', who is actually Edward of the legendary Piledriver. One might actually draw a decent comparison to that Canadian band, yet this album is a little faster and dare I say meaner. There are quite a few tracks here, 15 in total, and just about every one kicks ass. A few of them are intro pieces such as "The Invocation" and "The Hex", very campy vocal ritual chants but they fit in well with the occult theme of the record. But the rest are pure gold. "Lucifer's Lament" with its proto-death metal growls. "Execution of the Witches" with its creepy vocals and excellent riff during the verse. "Call for the Exorcist" makes a nice namesake track, one they could have played live and had everyone freaking out to. But there are no losers on the album, so just take your pick.

I have to re-iterate it's a shame this band didn't continue. They do deserve their place as cult legends alongside stuff like Possessed and Mercyful Fate, even though they had less output, it's clear this stuff had a healthy influence on the early death metal scene. I also note some parallels to the band Ghoul who I have recently covered. Similar masks on the cover of this album, the fact it was a side project and the band used alias stage names. Supposedly there were plans for a second Exorcist album that may have never seen the light of day. David Defeis, you know what to do. Finish it. Or just write a new one. This was amazing. The world could use more.