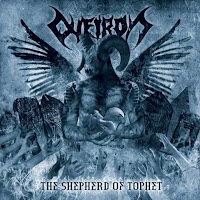 Veterans with a decade under their belt in the Brazilian death metal scene, Queiron now unleashes their third full-length album. I was not a fan of Impious Domination but Templars Beholding Failures did show some promise a few years back. Unfortunately this latest offering comes across a little average, but with its heart in the right place.

Queiron are fast and brutal, their style will immediately bring to mind the last decade of Behemoth records, as well as Morbid Angel and a little of their countrymen Krisiun. There is a barbaric velocity to their sound, like a serial killer breaking his restraints and murdering everyone in the psychiatric ward. The musicianship is competent, the beats are blasting, the vocals of Brutallik carry the expectant gravity of the David Vincent style. None of this is a problem, it's just the songs fall ever so slight of being memorable. A few had some promise, like the pure death metal barrage "Impalement Ritual Assembly" with a little early Sepultura groove and some cool, snarling off-vocals. "Entangled in Carnal Compulsion" is another good tune with a great little bass spasm at the beginning and them some nice, evil break riffs.

The album has a pretty raw tone to it, but this wasn't a problem for me as I thought it really did well by their style. If you are enamored of every brutal death metal with a pulse to come along, then you can't go wrong here. But there are just so many better albums coming out in the death metal field, with catchier riffs that never sacrifice brutality, that I can't find much of a reason to return to this.