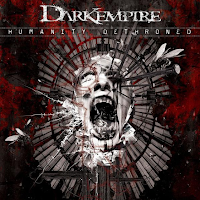 After numerous setbacks and delays which amounted to almost half a year, Dark Empire finally released their second album, Humanity Dethroned in May. And damn, was the wait worth it.

While their first album Distant Tides was a great debut from a relatively unknown guitarist and an established singer each recording from their respective corners of the world, their second offering is a lot faster, harder, and fleshed out (55 minutes compared to the paltry 36 minutes on Distant Tides).

The first half of the album shines with "Eyes of Defiance", a good fast opener, the title track, "The Forgotten Sin", a much slower song with a killer solo, and "Salvation Denied". But truth be told the latter half of the album, a 4 part suite dubbed 'The Apparition Sequence', is the best part of the album.

Starting with a catchy piano intro called "Prelude", it quickly picks up with "Haunted" and in my opinion the best song on the album, "Possessed (We Are One)". The set winds down with a slow and beautiful song aptly named "Closure" which finishes the album.

Everything on this album is a step up from Distant Tides, the guitar work done by Moliti, the vocals which intertwine Jens' clean vocals with Matt and Andrew Atwood's harsh vocals, and especially the production by Jeremy Krull.

This is definitely not an album for any power metal fan to miss, and hopefully this album puts Dark Empire and Matt Moliti into the metal spotlight.

http://www.myspace.com/darkempireband
Posted by Narian at 1:22 PM