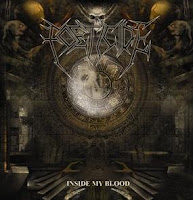 Though they've produced only three albums this decade, Foeticide are actually veterans in the metal scene, having formed back in 1992. And they've got a leg up on many of their peers, with quality production and very effective musicianship.

The majority of the tracks here on their third album are of the faster variety, and I dare say they hinge on the 'melodic' scene procreated by the Swedish scene in the 90s. Certainly this isn't going to appeal to your br00tal only, gore-drenched USDM fan.

As I mentioned before, the musicianship is great. The solos blaze into the mix, the riffs are generally fast to the point of an almost 'glorious' or uplifting feel to them. There is a large thrash influence on this record. The vocals of "Ruxxo" are snarling and infectious. This is dominant in many of the better songs on the album, such as "Mechanical Mind" or "Slithr Death". There are a few decent, groovier numbers like "Impiodissector".

Unfortunately, the band can never quite create enough of the catchy riffs required to permeate the album with much replay value. Everything they present is adequate, but never quite memorable. Anyhow, the proficiency of the band alone should be enough to stir up some popularity in the Mexican scene and beyond. I'm sure this isn't the last we'll be hearing of them.