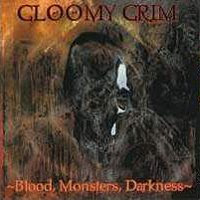 We all know there has been a split in black metal fandom between people who 'get it' and then those screwy mall goths whose concept of black metal involves Cradle of Filth, Marilyn Manson and bad horror films and sequels like the Nightmare on Elm Street franchise.

So, how about a band that takes the cheesy, symphonic horror shtick and actually makes it into something both hilarious and cool? Gloomy Grim is that band, and be prepared to have your heart wrenched out by their wonderful and hilarious music. This is their debut from a decade past, and quite a debut, setting the tone for much of their discography (though arguably they are a little heavier on more recent releases).

It only takes the first track "War" to tear a new asshole into the entire cheesy symphonic black metal genre, as well as fairy metal. After a creepy haunted house piano/strings intro, the grim vocals of Agathon (of Thy Serpent, the legendary Barathrum and others) begin their blood-tinted poetic spew, accompanied by the haunting fairy vocals of 'Whisper Lilith'. It's the perfect opening track, hooky and endearing and memorable. "Asylum" is a slower song, with a building crescendo of riffs reminiscent of Candlemass adorned in the band's silly symphonic touches. "Children of the Underworld" and "Ocean of Candles" follow the same formula as the opening track, though "Ocean" has a more direct passage of Lilith's vocals. "Pope of the Black Arts" and "The Summoning" are two of the better tracks on the album, and they even do a cover of Ozzy's "Over the Mountain" which sounds slightly out of place even though they give it the Grim treatment. Perhaps the tune is just too uplifting in comparison to the rest.

The production is pretty good on the album though it may have been served by more acoustic sounding drums. Much of this sounds like programmed beats and it may be the one issue I had here. Some of Lilith's vocals also leave something to be desired. Again, if you're only interested in the newsprint purity of true black metal, the rather tongue in cheek appeal of Gloomy Grim will feel below the belt, but that's the beauty of it. It's a delightful irony, set to quality music for its style. The band does get heavier on some of their later albums, but this is where it started and I recall laughing out loud even back then.