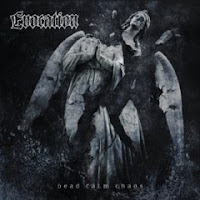 Last year's Tales from the Tomb was an eye-opening, excellent debut from this new Swedish band. Combining the raw death metal of countrymen Dismember, Entombed and At the Gates with a more melodic, simplistic edge, they stand out among even their present peers like Bloodbath. Not quite a 'retro' band but adapting this genre into something of their own. The melodic elements to the band may slightly reflect some of the members' earlier moments in Cemetary, an obscure comparison but effective none the less.

Dead Calm Chaos opens up with the somber, driving "Silent Sleep", which is decent but far from the crown jewel here. "Boundead" is a great song with a simple, weaving death lead interspersed with sections of layered groove. The title track just pummels you with its mid pace and melodic breaks. "Truth Will Come Clear" is a track that will appeal to just about any melodic Swedish death metal fan, one could compare it with early tracks of In Flames or Dark Tranquillity. Two of my favorite tracks are the aggressive "Protected by What Gods", which will appeal to the Amon Amarth sect. And "Antidote", another great track.

How does the album stack up with its predecessor? I'm going to say that I enjoyed Tales of the Tomb slightly more than this, believe it or not. But this sophomore album is a worthy successor, nicked only by a slightly too wide angle in the songwriting. It still kicks ass, it's still better than almost any melodic death metal you'll hear coming out of the rest of the world. So you know what to do.