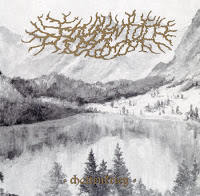 Second full-length album from this German NSBM act, despite a flood of splits and EPs over the past few years.

Unfortunately the choppy, amateur drums make this mess almost unlistenable. The guitars fare little better, as they sound more like an 8 year old picking up a guitar for two weeks and then playing 'my first thrash riffs' than any attempt at black metal.

The vocals aren't terrible, with better music and sufficient drumming they might actually work fairly well. The lyrics and vocals are in German so this is a pretty niche release, even more so due to the social/political bent of the lyrics.

While I may not share the world-view of this scene, I'm not opposed to listening to NSBM when it's got great music or interesting lyrics. Flammentod certainly fails at the former enough that I could care less about the latter. Horrible album.