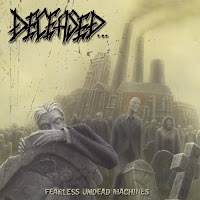 Ever the hybrid heralds of classic thrash, death and speed metal, Deceased have always been one of the treasures of the US scene. This 1997 opus is their strongest and most memorable work, and quite possibly the closest any conceptual metal album has come to capturing the pure zombie horror of the classic Romero 'trilogy'.

We're not talking simple slash and gore here, or 100 ways to eat a brain, what I mean is that King Fowley and crew have turned in a zombie album that is actually insightful, with ponderous lyrics that cover more than just the marching of the dead, but the scientific and religious implications of such an extinction level event. Does it have an answer? No. But it asks the right questions. You can feel the immediacy of the survivors of the outbreak, and their plight.

Musically the album is highly melodic and memorable without ever ignoring the energy and aggression of its death and thrash metal foundation. Fowley's distinct, gritty vocals are the perfect vehicle for this necromantic dystopia, while at the same time recalling the feel of Venom, Hallows Eve, and Tyrant. The true fuel for this undead fire comes from its raging guitars, churning out riff after riff of classic metal bliss. The production is organic, it almost sounds like you are listening to the band in their rehearsal room. Nothing is overdone, but the mix is perfect.

"The Silent Creature" opens with a sizable barrage of speed death and some satiable breakdowns and leads. "From the Ground They Came" is a lovely little instrumental piece setting you up for the excellent speed metal namesake "Night of the Deceased". Some of the better tracks like the raging "Beyond Science" and "The Psychic" compose the latter half of the album. Now it's not perfect, there are actually a few riffs among the crowd that weren't as interesting, though never truly detrimental to the vibe. The leads are memorable throughout, and kept fairly simple. Fowley is one of the best drummer/singers in the metal scene, and he's a great, busy drummer with an onslaught of beats.

This was over a decade ago, but for its time it was really a fine example of retro done right. Taking what has come before, paying your tribute yet putting together something new from the ashes of the 80s scene. Technically, they WERE part of the 80s scene, having formed in the middle of that flourishing decade. To that extent, this was a raging success and I don't believe I've heard a Deceased album since to match it. A lot of what made this so great carried through to the followup Supernatural Addiction, so if you love this you'll want to hear that too, as well as their back catalog previous to this. Essential listening for any fan of classic 80s speed, thrash and prototype death metal, or horror metal with more than typical depth to it.