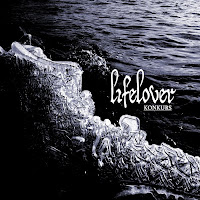 Whereas several of my critical collaborators sported major erections over the previous albums of this Swedish band, I was never quite impressed enough to feel any blood rising in my nethers.

Well ... as a wise man once said ... schwing. I can now add my own throbbing man-staff to the choir, rubbing heads among a sea of purple headed warriors. The event is Konkurs, the third full effort of this entity. Not quite a 'super band', but you get the drift: Lifelover's own members are swollen from the rank and file of Hypothermia, IXXI, Dimhymn and Ondskapt.

The 14 tracks presented here aren't the easiest to describe, I like to think of them as a fascinating middle ground between tortured, minimal black metal and the more romantic, melodic doom you might find in the earlier works of a band like Katatonia. The vocals of ( ) are unmistakable, could you imagine the wailing screams and barks of the depressive black metal multitude, only 'accessible'? Right on. The guitars are the real stars of the show here, they are driving and unforgettable as they hammer through the majority of the tracks with threatening grace. But this isn't enough for the discerning Lifelover, who also embellish many of the songs with tasteful piano licks and a dense, longing atmosphere.

Konkurs is a playground, and the manhood of its progenitors has free reign over the rides and attractions. You can never expect exactly what is going to happen, but it always happens for a reason and it is pleasing to the palette. The freakish snarls in the bridge of "Cancertid". The gothic tinged, sexy tongue of "Stangt p.g.a. Semester" or the post-rockish, luminous bridge of "Spiken I Kistan". Or how about the pure ambience of "Mitt Annexia" with its lapping shores and delightfully distant guitar sirens. Throughout the entire length of play, they are the masters of whatever they conceive. Some of these songs are instantly infectious, the rest aren't far behind.

All this would be hot sex, except that they even go so far as to write decent lyrics...you'll just have to translate the majority of them. I'm going to sum this album up with the following statement:

If 'emo' didn't suck, and melodic doom and black metal came along one night at the club and knocked it up, and then emo didn't bother with a paternity test, what you would have is Konkurs.

Live it.
Love it.
And pass me some tissues while you're at it.

hehe man juice for everyone in the whole wide world!