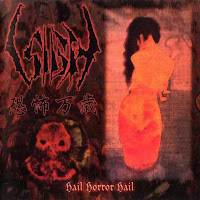 Sigh is one of the best metal bands in the world, but until this release, they were simply a very good black metal band from Japan, doing a familiar style with a cool ethnic influence.

Well, this is where the levee broke, and Sigh would never be the same again. And neither would I. The titular track opens with a volley of Mirai's mad snarling, and 70s influenced blues leads over a raging metal riff. You are immediately confronted with several layers of melodies, the guitars are fucking everywhere and despite this being a very evil metal album, they manage to give you that real good feeling. But it's not over, for the latter half of this opening song is full of lush, beautiful orchestration which recalls classic, romantic theater productions and then relapses into more Mirai snarls...and this is all happening to simplistic slasher/killer lyrics like this:

What the fuck? Right? And this is only the first song! The 2nd track "42 49" brings back some of that earlier Sigh feeling where you are reminded of Celtic Frost/Hellhammer...but wait, what is that? Psychedelic robotic vocals only a few seconds into the track? Folk guitars? What is going on here. I demand an answer.

What IS going on here is an already brilliant band has gone stratospheric in their mushroom-addled ambitions, and concocted one of the best original sounds to ever exist in the wide world of heavy metal. A style so unique it belongs up there with the Voivods of the world, the few and far between.

The rest of the album is equally engaging. The frightening, discordant orchestral doom groove of "12 Souls". The pure piano dirge of "Burial". The shimmering, epic "The Dead Sing" and electro-orchestral number "Invitation to Die". And you haven't even got to "Curse of Izanagi" which is one of their classic go-to songs.

Hail Horror Hail isn't Sigh's best album. I'd reserve that title for Imaginary Sonicscape. But Hail Horror Hail is still an extremely beautiful work of art, which belongs in the collection of any person of taste. It was truly the turning point that skyrocketed them into the upper echelon of metal genius minds.