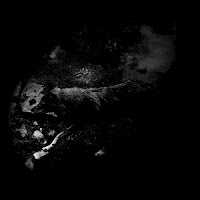 Finland's October Falls have been going for a good bit now, albeit more or less outside the realm of metal. Mikko's sublimely simple blend of acoustic and piano folk melodies stood alone until last year's The Streams of the End, which marked the first substantial move into black metal. This ep had a pleasant style, sounding more or less as one would expect but not going much further.

The Womb of Primordial Nature was a bit of a surprise for me. Not only does it refine the sound of the ep with a clearer sound that allows the folk elements to shine through, but it also upped the intensity. Are you sick of every folked-up black metal release being described as epic? Well, stop reading, because there's really no way around it - the sound here is goddamn epic. From the bright, soaring guitars to the pounding immediacy of the drums, I find myself holding my breath as I get caught up in it all. Mikko's vocals could be described as monotonous, yet they're placed strategically throughout the songs so as not to wear out their welcome.

Rather a success, wot! Managing to preserve and imbue the classic folk tranquility in such a whirling piece of black metal is something that October Falls have pulled off with aplomb. You could fault the album for being too short (a complaint common to all of his releases), but I find that it keeps the album fresh and ready for relistening, and I don't have a problem with that.

I think this is probably my personal favourite for 08, not necessarily the "best" album, but probably the one I most enjoyed listening too. Of course it helped that my first listen was while I was taking a woodland stroll, but still.

Yeah, they just got it so right with this release. It does what it needs to, and it does it fucking well.