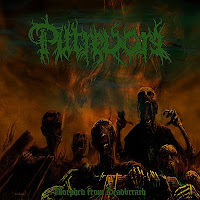 Putrevore is a collaboration between Dave Rotten (Avulsed, Christ Denied) of Spain and Rogga Johansson (Ribspreader, Deranged, Demiurg, Carve, and many more) of Sweden. It's only the debut album but from what I'm hearing I can only hope for many more.

The style is simple: Rotten's extremely guttural vocals over a down-tuned, crepitating variant on the retro Swedish death metal style that's been all the rage lately. And it rocks. Not only does it deliver the brutality in spades without any generic chug-blast-chug doldrums, but it's actually groovy and genuinely fucking creepy.

The album opener "Aeon Leviathan" is a good example of the faster work, with simple, somewhat repetitive riffs. The same formula applies to "Torn from Abzu" and "The Skies Vomit Sulphur" (one of my personal favorites here). "As They Return" is a groovier, slower piece that I really enjoyed. "Dark Surgery of the Ancients" walks the line between the faster and groovier material, another of my favorites. In all, the tracks are consistent and never dull.

Morphed from Deadbreath is a nice, disgusting surprise that will appeal both to the old school cravings of Rogga's other bands, as well as the more brutal sect, including just about anyone who loves old, unapologetic death metal.

oh man, the vox. I usually find that super guttural death vox sound too strained and goofy, but these are ace.