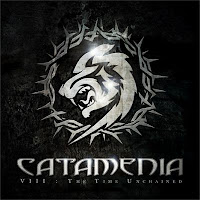 In the mid to late 90s there was a noticeable surge of what we'd call 'melodic' black/death metal coming out of Sweden and Finland. The harsh black metal vocals were present, but they resided over more glowing, warm guitar riffing and generally solid studio productions. Catamenia has been a staple of this style throughout their career, unswerving as this is now their 8th album and they have yet to change tunes. This has been both a blessing and a curse, while much of their music has been basically 'fluff', they've put out a few decent records, like their debut Halls of Frozen North.

Unfortunately, while this new record maintains the level of melodic sheen and warmth they are known for, there are some clear weaknesses dragging it down. The opening track "The Garden of Thorns" features some all around weak vocals, from the kind of poorly mixed snarls to the atrociously weak 'clean', tortured vocal which just sounds like shit. Unfortunately these vocals are used to the detriment of other tracks like "Alive...Cold...Dead!" and "The Time Unchained", which would have been so much better without them. "Dominion" is another example, would be a great song without these shitty, post-Hetfield vocals.

Otherwise the guitars are mixed all shiny and nice, the riffs are catchy, and the production is killer. It just really, really sucks in the vocal department. The only exception would be the death metal vocal parts, and if the entire album had consisted of only these, it would have actually been quite a lot better. As it stands, it's kind of like waking up for a nice bowl of Frosted Flakes only to find out the frosting is actually bird excrement.