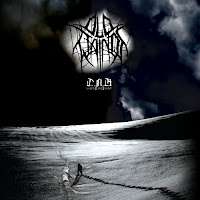 Having been a fan of their previous albums Scalding Coldness and Where the Snows Are Never Gone, I was highly anticipating the new album from this grim Russian band. While not a bitter disappointment, I can't say I'm highly impressed with the new material.

After a few seconds of a cool glaring synth intro, "Storm-Whip" erupts into a pretty boring, predictable riff with a thrash element to it. You'll notice a more thrashing element to several songs on the record, in fact, and while I always welcome some good thrash, this doesn't necessarily amount to much.

Some of the other tracks fare a little better, and remind me more of their previous albums, songs like "Bloodstained" and "Born Into the Freezing Dark". The title track is also an interesting one with its ambient/prog breaks in the middle. And the album ends with the pretty raging "Cold Northern Order". But the the first tracks just didn't warm me up (or freeze me dry in the case of this band) to fully appreciate the album.