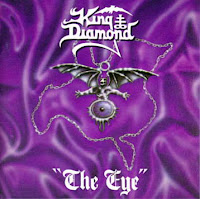 The fifth in a long stretch of masterworks by the Mercyful Fate front man, I still regard The Eye was my favorite King Diamond record. After the hard hitting trio of Abigail, Them and Conspiracy, this never quite got the same level of recognition, but it seems people have since gone back to revisit and enjoy it. I've never stopped.

Like its predecessors, The Eye is a conceptual album rooted in gothic horror. It doesn't continue the story of the previous two albums, however. This is no morbid tail of ghosts, but of the witch trials. And it's flawless. Though not quite as hard hitting or technically endowed as Conspiracy in a production sense, each song is distinct and memorable. The mix of the record is perfect, with a nice atmosphere. Andy laRocque weaves a beautiful tapestry of rhythms and leads, ever the star of Diamond's musical entourage. The bass and drums aren't dominant in this recording, but they don't need to be. They do their job, and some of the drums aren't even acoustic, but a drum machine! Snow Shaw's drums were always so simple you barely notice anyway.

"Eye of the Witch" provides a slower paced, powerful intro to the subject material, with Diamond's graceful falsetto already providing an unforgettable chorus. "The Trial" features his corny yet lovable narration and some amazing, fluffy solo work from laRocque. "Burn" is just one of the best. metal. songs. ever. "Father Picard" is dominated by that wonderful Rhodes-ish speed metal riff lapsing into the best melody on the record. Just amazing. "Behind These Walls" has one of the best keyboard leads ever used in Diamond's discography. "Insanity" is a delightful acoustic instrumental that you will never forget. This album is that good.

It's no surprise of course that this album arrived in such a pinnacle year for metal music, really the climax of that 1986-1990 period where many artists could do no wrong as they were exploring the boundaries of this epic genre of 'extreme' rock. The Eye belongs in any metal lover's collection, just to the right of the first four King Diamond albums.