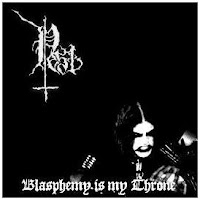 Considered the first 'official' release of this excellent Swedish band after a trio of demos in the late 90s, Blasphemy in My Throne is an EP representing the perfection of form across six tracks.

First, it should be noted that the 'Studio Helltower' production on the EP is fantastic, and if that's a real studio I will pee myself with glee. The songs sound incredible, grim yet bright, the perfect vehicle for the vile guitars and vocals of Necro.

All of these songs are highlights. The title tracks opens us up with its mid, plodding pace. "Along the Path of the Fallen" is an excellent, mid-paced barrage which channels early Emperor and Blood Fire Death era Bathory. "Towards Desolation" starts off faster, but then once again morphs into that perfectly evil, slower pace as Necro's vocals start to spit their vitriol. Amazing song. You won't survive that, but even if you did, you'd have three more. "Circle of Damnations Five" is another scorcher which picks up with a nice little thrashy bridge and then a diabolical blast beat. Compared to these, the last two tracks don't sound quite as 'bright', yet they are every bit as good. "When Darkness is Complete" and "Thorns from Underneath" possess a more somber, melancholic nature, but round off the EP nicely.

I'd argue that this remains the best of the Swedish Pest, though I really enjoyed their demos and the recent Rest in Morbid Darkness album. Blasphemy in My Throne is an essential listen for any fan of the grim and necro, the fact that it sounds so amazing is just icing on the cake.