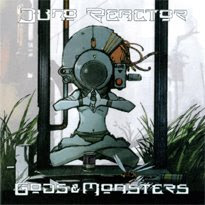 Mr. Reactor sir, I know you're into the world music schtick. More often than not, as is the case with many multi-culti artists dripping in a global agenda, it comes across as pretty forced. Even shallow.

But I think even I could forgive this, if it were not for the horrible
faux-soul vocals that defecate over the majority of the tracks on this album. It's a damned crime, because otherwise, most of these would be exciting songs I could lose myself in. With the possible exception of the female lines in "City of the Sinful", every vocal on the entire record is throw-away, saturating the immersive electronics in the juicy shame of what aural delights they might convey in their naked state.

Now, there ARE a few tracks on which Ben Watkins decided to ride bareback. "Las Vegas Future Past" is a gritty old school Juno number which would be well placed on any VHS anime 'preview' in the 80s. "Immaculate Crucifixion" is a real rouser with its orchestral swells. Neither of these is enough, and it is unfortunate that I can't give many of the other tracks a fair shake due to the vocals. I've noticed in recent years this is becoming an annoying trend in electronica. Solid artists like Paul van Dyk have also weighed down their albums with unnecessary vocal detractions. Has techno become so stale that we feel we need to paint sub-optimal, energy lacking compositions with crappy PC/worldview lyrics that make 3rd grade English students seem like poet laureates by comparison?

"Tokyo, out of my head you flow/From my heart and my soul, watch the energy flow" I think I just threw up in my mouth. Whoever these singers and lyricists are, for the love of every god you exalt, fucking fire them.

Verdict: Fail [4/10] (I shake my bloody maracas in your direction)

ha, those lyrics sound like they'd fit in Soulfly.