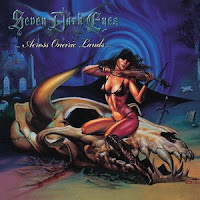 And yet ANOTHER debut from an Italian band, and another cheesy 80s female fantasy portrait on the cover! I promise this is the last for today, ladies and gentlemen.

Seven Dark Eyes is another gothic/fairy type act, but this one has a female vocalist who can just about carry a tune, and does pretty good with layered vocals going off her main line. The band also has a lot more 'crunch' and powerful feel to their songs than many of this type, I'd almost categorize them as 'power metal' on some of the songs, and to be truthful there is even a hint of thrash, not a surprise when you see pics of the band wearing all thrash metal shirts I think.

The opening tracks "Lost Souls" and "Winter's Sorrow" do kind of rock out, setting a good pace for the rest of the album. It's enough that I actually listened through without ever really putting my heads in my hands for le sigh. That isn't to say the band is great or original, certainly the song titles are just as cheesy as anything else these days lacking in creativity. One thing I liked quite a bit was when they used a more 'haunted house' style to the keyboards, with the organs. Nice touch.

In the end, the band has some gusto to their style, and this is a band that will appeal to die hard fans of Nightwish who are out there searching for more of that epic female-fronted fantasy stuff. Monica Calvieri's voice isn't exactly excellent, but it's enough that I didn't vomit in my own mouth when I was listening through. Recommended for fairy fantasy metal freaks, or at least for anyone else to laugh along to. But they in no way suck, and if they could incorporate even more of that thrash and power they obviously listen to, they could have something here.

I didn't vomit while listening to the two tracks from their newest album, but I was pretty damn close.