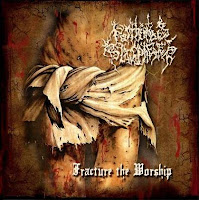 Posthumous Blasphemer is one of my favorite bands from Belarus, a brutal and barbaric death metal battery. Their previous full-lengths have all been high in quality in addition to having a cool aesthetic as far as their cover art blasphemy. Fracture the Worship is no exception, and in fact it may be their catchiest release yet.

"Revival of Contempt" opens the killing spree, a symphonic and devastating instrumental which sets up the punishment quite wonderfully. The band then blasts forth into "Sermons of Enthrallment", a cacophony of arpeggio sweeps, insane drumming and complex riffs. It's also got some nice breakdowns, which thankfully don't last very long. "Remains Devouring Consciousness" may start out typically like most brutal death, with the chug blast burst alternation, but it evolves into some intense guitar work which will spin your head around. "Flagellation for Rescue" is a necksnapping flurry of awesome guitar leads over hectic old school riffing, once again with some complex breakdowns which maintain the listener's attention. The rest of the tracks also slay, with "Disfigured Faces of Pontifexes" (excellent melody later in the track) and "Doomed Flesh Tortures" among my favorite tracks the band has ever recorded.

The record has a crisp mix nicely balancing all the instruments. These guys are excellent players, in particular the guitar and bass which will run your ears around in loops. At the same time, what they play is a lot of fun. You will not get bored listening to this. It's not simple brutal death metal flagellation but an experienced attack, not afraid to shy from some melodies where needed. As usual the songs surround the concepts of blasphemy and sexual perversions. And it made me very, very horny, so what does that say about me? Who cares. Posthumous Blasphemer are obviously one of the tighest Eurasian bands playing this style of death metal, so don't miss this album.

Now THAT is sex appeal.