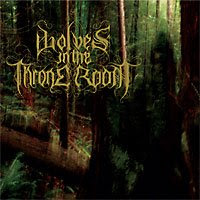 'Tis that sacred time again for us to be blessed with another release by ultra-reclusive, ultra-meaningful Pacific Northwest enviro-black metallers, Wolves In The Throne Room. Now, what awaits with this release? The continued affirmation that our modern society is at odds with Mother Earth? That our Spaceship Earth is experiencing critical system failure due to our carelessness and total disregard for the environment? If you answered yes, take another soothing sip of organic peppermint tea and pat yourself on the back.
Malevolent Grain is another attempt by this foursome (they added a guitar player to their lineup, presumably because he has a van that runs on loathing for capitalism) to tell us about the errors of our ways. The EP itself sounds very organic, yet polished which is a positive I can attribute to the release. For what the band is trying to achieve, they do know how to set the right atmospherics for it. Now, on to the negatives. The two songs that comprise the EP, “A Looming Resonance” and “Hate Crystal”, both clock in at over 10 minutes each. This should be no surprise since both of the songs sound like they were put together with parts of previous WITTR releases. There is nothing new here. It is the same material with different song titles. “A Looming Resonance” does, however, come with somewhat interesting female vocals, courtesy of Jamie Myers from Hammers of Misfortune fame, that were misleading at first since they appear quite early in the first track and made one think that perhaps the band had decided to add something a bit more dynamic to their songs again. It should be noted that Myers also featured on the first WITTR full-length release Diadem of 12 Stars.
I cannot claim to actually know what the band is aiming for these days with their releases besides from reiterating their mantra that our demise is inevitable should we continue with the direction modern society is headed in. Do they offer anything new? Not really. Is it interesting, engaging material? No. Is it great to listen to in the background? I would be tempted to say yes. As stated previously, the production on the EP is phenomenal and everything sounds crisp and clear, without losing that fuzzy, organic vibe that a band like WITTR could not do without. Yet, the material itself is bland and boring. The band is touring more these days so maybe they are a band that needs to be experienced in the flesh in order to 'get them'. Try it with some organic mushroom tea that you sip from a cup made out of birch bark. Maybe it will all make sense then, but really, who cares?
Verdict: Indifference [5/10]

www.myspace.com/wolvesinthethroneroom
Posted by HEYMAN at 1:26 PM

I am no fan of WITTR, but I feel compelled to ask: Is there any possible way that your review is skewed just a tiny bit by your preconceived notions about the band and their fanbase?

I should make it clear that I'm not trying to be a dick, but this reads way more like a criticism of a type of person than the album itself. The short blurbs in the middle about the record actually seem fairly positive.

It's confusing to me why something that's polished, organic, and has the right atmospherics rates as a 5/10. Of course, maybe it's just that hippie tea I've been drinking all morning.

As for the rest, Morgenstern has simply added entertainment where there was none.

I'm surprised there was no outrage over my Sirenia review, Frank :D

Well, to be fair, I haven't listened to the EP. I'm not really trying to argue for a better score, but a more thorough explanation of why it's a 5/10 outside of the woodsie-bashing would be welcome.

I must have missed the Sirenia review when it popped up. Heh.

I guess I just wasn't that entertained by this one. It's pretty clear that there's a bias against the material from the start - not that I'm saying reviews should be objective - but it would be nicer to read more about the album and less about how much Morg hates hippies.

What I got out of the review was that there's nothing new to the ep, so Morg tried to spice it up rather than take time describing how it's exactly like previous albums. I suppose that's unhelpful for people that aren't familiar with the band, but it's a niche review for an ep from a niche band, so I doubt it'll hurt much.

There was some bias against the band going into this review because I feel they have been terribly overhyped as the cornerstone band of USBM and that they're the new incarnation of Weakling. My gripe with the band, from a music standpoint as stated in the review, is that there has been no progression in their music since they started. They're reusing riffs, reusing melodies and reusing the same strong structures. For a band that's supposed to be so incredibly stellar, this EP is close to an embarassment.

The only nice thing I can say about it, asides from the production values, is that the clean vocals from Myers were a good touch and made the first song interesting.

I'm not trying to dig at hippie culture, but I find bands like WITTR are pretentious as fuck about their ideals and their really dedicated fans are too far into the anarchoprimitivism and biodyanamic theory extolled by Jensen and others to realize that a lot of it is bullshit and doesn't come to terms that the point of no return for a lot of things in terms of society and progress has passed, but this has nothing to do with the music, so I'll let it be.