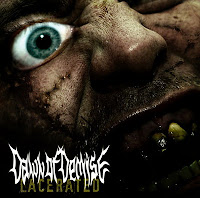 This EP is a follow-up to last year's debut album Hate Takes Its Form. Though I don't recall hearing that album, it may be worth tracking down, because the material here is quite good if simple brutal death metal with tasteful breakdowns and a good sound.

There are only two originals on the EP. "Extinction Seems Imminent" has some good grooves and nice use of a sample. "Ridden with Disgust" is a catchy track with some nice faster riffing and a good lead section. They remind me a little of Heartwork-era Carcass, not because the vocals sound alike but they have that punchy, perfect distorted tone. Structurally it's not unlike a lot of the better brutal USDM. Filling out the EP are three cover songs. Suffocation's "Infecting the Crypts" is a good choice as they are another big influence on the Dawn of Demise sound. The cover of At the Gates' "Blinded by Fear" was alright, the only real difference is that the vocals are in the guttural growl instead of Lindberg's snarl. The final track and cover is the best, Obituary's "Turned Inside Out", which fits very well despite the fact this guy is no John Tardy. The slower sections in the latter half of the song sound very evil here.

I'm not a fan of these short form releases, least of all in the 21st century and with mostly cover song. However, the EP sounds fantastic, so assuming you can pick it up on the cheap it's probably worth it. A worthy addition to the good crop of Danish death metal I've heard lately.