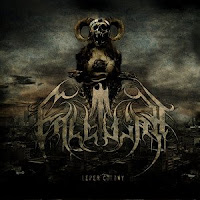 Fallujah is a young band from San Francisco which plays a hybrid of technical, brutal death metal with a lot of crushing groove and breakdowns, include some more math tech stuff which bears a similar sound to Meshuggah. The band does not consider itself 'deathcore', but I have to admit the constant metalcore style breakdowns mixed with the guttural vox and the faster, more technical material reminded me a lot of bands in that scene.

That said, Leper Colony is a decent EP and introduction to the band. There are six tracks here, opening with the desolate and mechanical math chug of instrumental "Impending Incarnations". "Ancient Dialectic" breaks out with all cylinders firing, first with its faster and technical riffs and then a bludgeoning rolling chug breakdown which will probably have fists and feet flying in mosh pits for months to come. The song gets better after the first minute with some rumbling, atmospheric, dark melodies cruising over the pummeling chug arithmetic. "Infernal Mejesty" has some nice winding riffs and a nice progressive pacing. "Slave Race" begins with a punishing rhythmic pattern before condensing into its faster freak out section. "Le Serpent Rouge" is like punching yourself in the jaw 40 or 50 times. The title track ends the EP with some nice tech black metallic riffs thrown in, it's one of the better tunes here.

The EP sounds clear and each instrument is distinct, the vocals are sufficiently brutal even when shifting to the snarl from the grunt. These guys can play their instruments well, like many similar bands there is a massive untapped potential. Unfortunately I feel like it is too often squandered on typical pit breakdowns. The band is far more interesting when they move at a faster speed, though to be fair they had a few crushing, slower riffs. I think they're a good band to check out if you are a fan of stuff like Decapitated, Meshuggah or Job for a Cowboy. A nice cross-appeal to fans of various metal sub-genres. I didn't like all the songs on this EP equally, but there are some moments of true quality which shine through, in particular the final track. I think we'll be hearing a lot more from this band.