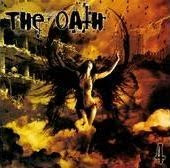 The Oath stands at an interesting crossroads between black and death metal, with prominent use of synthesizers for atmosphere, and a thrash metal edge to much of the riffing. Though it's their 4th release (including demos), it is their second full-length offering, which initially confused me because of the title. Anyhow, 4 isn't perfect, there are a few tracks which I felt like skipping past, but the album has a good mix to it, and if you're looking for something which isn't afraid to explore that crossroads between genres, you might enjoy it.

The title track opens the album, a short keyboard instrumental. "This Day" rages in with some thrashing/death metal riffs which are then accented by atmospheric keyboards. The song ranges from some death metal, single note picking to blast beat symphonic black metal. "Orgasm" starts with an old school death metal riff, then erupts into another gothic black metal charge. It has a pretty sweet melodic breakdown in the middle. "A Question of Faith" introduces some clean male vocals into a 'prettier' tune, but they still have the faster riffs here. "Unholy Blood" starts much like "Orgasm", with one of those flowing death metal riffs, some synths and blast beats. Other highlights are "The Unborn" with some of its good melodic, thrashing riffs, and the closer "Godless Existence" which reminded me of a thrashier mid-period Samael.

The mix is quite good, it was produced by Kristian of Crematory. The guitars blaze over the throbbing bass pulse and the synths are placed perfectly without smothering the rest. The drummer is pretty good. The vocals are your average black/death metal snarl, they aren't bad but they do lack the character to put an album like this over the top. The clean singing I could also do without, but I've heard worse. I can't fully recommend this, there are a few choice moments where the band shines but I found myself bored during some of the songs, much like I feel when listening to other symphonic black metal types. Still, the band's ability to cross some genres into a cohesive and synth-symphonic sound may very well appeal to fans of bands like Sigh, Cradle of Filth, etc.