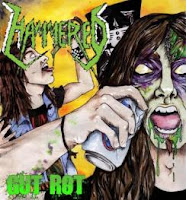 Queue the silly cover art and let the retro thrashing begin. Unfortunately, my usual gripes about the thrashback hysteria cannot apply to Hammered, since they stand here and deliver eight anthems of classic, meaty thrash/speed metal which have shut me right the fuck up. It's not original material, and it's not brilliant, but it's more than enough to whet the palate of the thrasher longing for his yesteryear of torn denim jackets with patches, hi top sneakers, etc, without making a completely mockery of itself (or you). Honestly, aside from the cover and having a few tracks like "Gut Rot" and "Elm Street", most of this is pretty pissed off thrash about politics and war.

They've got a style which reminds me of Sacred Reich, Nasty Savage and Hallows Eve, perhaps with a little Deceased thrown into the vocals. It's dirty and pummeling music, with a nice brisk production capturing all instruments equally. The album opens up with the title track, a volley of quick and satisfying old school thrash riffs that break into a nice mid-paced part. This is followed by "Trench Warfare", a decent if familiar sounding tune. "Violent Exit" starts with a slower thrash which would do S.O.D. and Slayer proud. Other good songs on the album include "Population Control" and "Elm Street", but there aren't really 'weak' tracks, it's pretty consistent.

So you've got some corn fed Midwestern thrash metal from this young band, and as long as you approach this with the understanding it's not going to be original but still good enough to chug beers and circle mosh to, then I think you will enjoy the hangover.