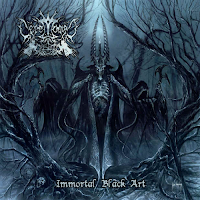 Thanks to the review of Ceremonial Castings newest album Salem 1692, I decided to look into their back catalogue. And this is when I came upon the 2005 album Immortal Black Art, a low-fi symphonic black metal album quite similar to Salem 1692 in many respects.

The album starts off with my favourite song of the album, the fast and thrashy "Come Forth... Damnation". After that we are treated to "Desecration of Grace" which is probably my second favourite song on the album because of the lyrics that are just way too catchy:

Next comes the title track and it's sadly not the best song on the album, at least not until the later half when the weird chorus is dropped and Lord Serpent starts to mix his screams and his clean vocals to create a really great cosmic sound vocal effect. "Human Slave Infantry" is a straight up thrashy black metal song that, while good, is pretty forgettable. Then we have the first instrumental of the album, "Of Warriors who Gather". It's a synth-heavy song, filled with Old Nick's signature style of low-fi synths that just sound fucking awesome. "Reborn Through the Bestial Flame" is another great track with some cool riffs. "The Miracle of Bleeding" is a fast little song, nothing too special... unless you listen to this song with some good headphones because then you're able to hear the insanely brutal bass drum in all it's thundering glory that is reminiscent of a giant golem aimlessly stomping across the land. "Propagating the Witch" is a great song about having sex with a witch, which would have been good enough for me, but the solo (read: the climax) that starts at 2:03 is something out of this world. A neat cover of "Transilvanian Hunger" and an acoustic/synth instrumental titled "Post Storm Silence" finish off the record.

If you've heard any of the later Ceremonial Castings albums then you can expect the same style/sound/quality of the guitars and synths, but I felt that, unlike Salem 1692, there weren't as many catchy riffs though what was there was very well done. On the other hand the vocals done by Lord Serpent confuse me as to why they opted to go for the less-polished Norwegian style of vocals for the later two albums when the vocals on this album were in my opinion near perfect. Another thing I would like to mention is that too many of the songs seemed to have outros that lasted forever, something that bugged me a bit the first time listening to the album.

Overall I really enjoyed this album. While it's hard to go backwards through an artist's discography, I felt that Immortal Black Art gave us an easier album to just sit down and mindlessly listen to than the amazing concept album Salem 1692 (an album that I view as Ceremonial Castings best album ever).

http://www.myspace.com/ceremonialcastings
Posted by Narian at 1:41 PM