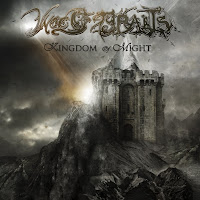 Easily one of the most talented new acts on the Metal Blade roster, the sophomore effort from Ohio band Woe of Tyrants is superior to their debut in every conceivable way. The band's ability to deliver a hybrid of thrash, death and power metal at such a frenetic pace is staggering, especially when so many of the riffs hit the mark.

Yes, this band is quite fucking fast. The musicianship is right up there with nearly anything you'll find on the US scene. It's not just the riffs and the melodies, but there is certainly a capacity to shred when necessary. Still, despite this, they reign it in enough to actually craft catchy riffs that appeal far beyond the ADD speed requirement. After a brief intro, "Soli Deo Gloria" erupts, a hyperactive melodeath anthem with more riffs than you can shake your dick at, yet despite the unending barrage the song is quite cohesive. "Break the Fangs of the Wicked" is also lightning paced but has a few melodeath breakdowns. "Pearls Before Swine" begins with some anthemic power metal speed, then rocks out. The rest of the album is consistent, all the songs here will rock you, though I found "The Seven Braids of Samson" and "Like Jasper and Carnelian" among the best.

Thematically the band is concerned with religion, history and the human psyche. I'm not sure if there is some agenda to this album, the lyrics are written quite well though:

The darkness will not subside.
Hands are reaching at the footsteps stumbling in the night.
The stars can light the way, countless eyes ablaze.
A lamp shining truth.
In a corner roaches claim the kingdom, they scatter in the light.
With cloak of dark words, they wage this fight.

That leads me to my one single gripe...I'm not a huge fan of the vocalist. He's got that melodeath overbite you hear so common to American bands doing the melodic death or metalcore crossover style. The snarls aren't so bad, but the more gruff and guttural vocals that don't do it for me. Scaled back a little, they would be a lot better in the recording. Regardless, this is a rising star in the American metal scene, they've got the chops to rival other technical, fast bands like Protest the Hero and this sophomore effort will undoubtedly garner them some attention.

Just look at them. Hiding behind claims of not being a Christian band.

"This album is meant merely to express a respect for the force that can create everything we see, hear and digest. To encourage people to consider their lives, consider anything and everything, as opposed to just remaining lethargic. Upon doing so, it's my hope that someone might develop a peace with the truths in which they discover, and if nothing else find something within our record that leads them to improving their life as opposed to the common 'metal' message of destroying it."

As much as I want to 'rue' all the Christian bands and scorch the Earth they walk on, I still have to give credit where credit is due.

That said, they aren't very forceful about it in the lyrics. And I don't really have a problem with 'positive' metal, as long as it doesn't try and force lies down my throat.

Also, nice bit of select quoting there. You forget the rest of it:

"The main theme, while Christian based in influence, barely goes into specific stories from the bible. I chose to write it this way due to the fact that we do not label ourselves a Christian band, and I by no means am here to tell anyone that I have the whole world figured out."

I don't think they deny it, just don't want to label themselves as such.

Yeah, I realize it's selective quoting, the guy's just such a douche that I don't really feel bad about it. It's really easy for me to dismiss something like this, because it really isn't my thing musically, and I'm in theological opposition to it.

I'm not trying to diss on the review at all, but there are certain things I really dislike. One of them is Christian bands who try to remain more accessible by claiming not to be a Christian band. When was the last time a Satanic BM band with Satanic members and Satanic lyrics claimed not to be about Satanism?

Just stand up and own it. For people like me, it's a lot easier to respect that.

It probably has something to do with growing up punk. I want my musical politics to be out in the open and plain to see. If you don't want to be a Christian band, don't write lyrics like:

I skipped over this when I heard the vocals, and I'm glad you mentioned that in the review. There's something just so...processed about that melodeath style, turns me right off.

I never quite got why it was okay to shove blatant Satanic messages down people's throats but not Christian ones... but it doesn't really matter.

@ META: Yeah, with different vocals this could have been a lot better. I don't mind one of the guy's styles but that over processed growl...ugh.

@ WALRI: Rock & metal have always been associated with the devil. Even Jerry Lee Lewis. Even Ozzy (a Christian through and through). Honestly though, most of the 'Satanic' messages are fakes and I think everyone realizes that. The Christians messages tend to be 'for real'. I agree with you in principle, but it's just never going to happen.

Yep, I actually thought of that after I asked. It doesn't help that even in metal most Christian lyrics are indistinguishable from sappy love songs except for a capitalized You.

I don't think the purpose of art is ever to be propaganda, but it's a lot more tolerable when it is actually well written and has some subtlety.

You guys know anything about good music schools for studying jazz plus more eclectic stuff? I don't think I want to go to Berklee, it's a little too high-pressure and political nowadays for my tastes... but I'm gonna transfer somewhere sometime soon.