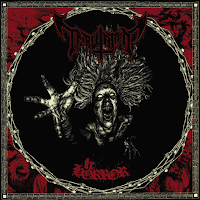 Fuck you, Sweden. Where were you hiding this one?

Tribulation are a four-piece death metal band rooted heavily in the chaotic, early German thrash. Think Kreator upgraded with that classic, thick Swedish death guitar tone and then prepare to have your ass kicked all the way back to Hell. After a few demos and an EP, they release this devastating first full-length. They've opened up my new year with bang because this is one of the best debuts I've heard in the death metal genre in some time.

Chaotic yet controlled bursts of infectious, infernal energy will drive these 9 tracks deep into your soul. Pianos grace a creepy horror intro called "Into the Jaws of Hell" before the band levels you with "Crypt of Thanatophilia", a beast of blazing death metal riffing with a structure not unlike something you'd find on Terrible Certainly. Not only is the rhythm section rock solid but they can rip off into the crazy evil solo style made legend by bands such as a Slayer or Pestilence. "Curse of Resurrection" begins with another Kreator-like power volley, fast as fuck and entirely unforgiving. "Beyond the Horror" starts with an intense thrash hook before grinding out the complete fucking evil. "The Vampyre" just blows your veins out with its descending melodies and fist pumping death/thrash mayhem. "Spawn of the Jackal" starts a little slower with some thrash/doom riffs but picks right up. The other songs are likewise intense, the closer "Graveyard Ghouls" is furious.

The album sounds stunning. The guitars are like meat hooks, sinking themselves directly into the flesh and then pulling you in multiple directions at once. The vocals are a good blend of the death and thrash styles, not as snarly as Mille but otherwise similar. The band is extremely consistent, this is one of those fast and fairly short albums like a Reign in Blood or Extreme Aggression. Get in. Get out. Fuck and fight. Take no prisoners. Leave no evidence.

We're unlikely to hear many more debut albums this year of the quality Tribulation offers, if you are a fan of Swedish death metal, classic German thrash, or really... ANY extreme metal, this is essential to check out. They may not offer much in the way of originality, but the intensity is hard to match.

Fuck you Sweden, for doing it to us again.