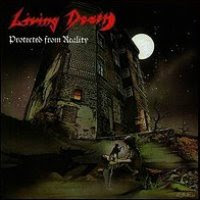 German thrash is best known for its acclaimed triumvirate of Destruction, Kreator and Sodom, but just below the surface you will find a very solid roster of bands who didn't quite make it as far: Tankard, Deathrow, Vendetta, Mekong Delta, Protector, and then there is of course Living Death. With a wilder style employing the shrieking vocals of Thorsten Bergman, they ravaged the scene with their early albums Vengeance of Hell and Metal Revolution. However, the filthy speed metal of their third album Protected from Reality has always stood out to me as their best work.

There are no frills on this album. Bergman's vocals are plastered all over the twisting, chugging, bulldozer thrash riffs, as much in the class of NWOBHM-on-crack vein as they possessed a Teutonic thrash edge. The album begins with the pulverizing "Horrible Infanticide (Part One)", and the field is immediately leveled by the sound of Metallica meets Destruction beneath an air raid siren. "Manila Terror" follows this assault with another, though this is not my favorite song here. "Natures Death" starts with a good mid-paced thrash riff under a wailing, noisy lead, then begins a crunchy bit akin to Anthrax. The verse vocals are sick, I like the riffing with the atmosphere of the squealing guitar harmony. "Wood of Necrophiliac" begins with a very brooding 80s acoustic guitar, lots of reverb, interwoven with some slower paced chugging, vocal choirs and instrumental creepiness. A very interesting track. "Vengeance (Horrible Infanticide Part Two)" is a scorching thrasher with very Cirith Ungol-like vocals over the bands gritty street level thug thrashing. "Intruder" is a speed metal mosh slugfest with some sick breakdowns, Bergman's vocals are excellent here, cutting right into you. He sounds like a girl, but not...maybe a harpy...a thrashing harpy! "The Galley" is big juicy metal sauteed in a slower, driving pace and has some sloppy but sick lead work. "War of Independence" begins with some nice thrashing along to Bergman's psycho lyrics, before the drums pick up into a speed metal mayhem. The album ends with the goofy "Eisbein (Mit Sauerkraut)", your Tankard type speed metal anthem about ham hock and condiments...yeah, we'll not touch this.

The album is aggressive and raw; if you like this old school stuff you'll become totally infected by the explosive energies and bang your head into dust. At points it feels a little uncouth and sloppier than other German thrash, but when you're having this much fun, who cares. Though they have numerous albums of a similar quality, I've always enjoyed one of if not the best, alongside Metal Revolution...the band did mature as they went on and their later albums are a little more thoughtful, but the raw and pummeling feel of this is where it's really at.

This band has reformed so we may be hearing some new material from them soon, the first in almost 20 years...

My uncle has a copy of this on vinyl, I believe. The album art is ACES.