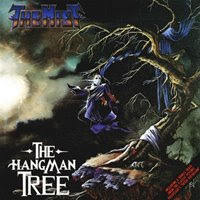 Sepultura has always been the band that put Brazil on the metal map, and rightly so: they produced some of the best thrash metal of their time before their descent into suck. But they were far from alone. Bands like Sarcofago, Chakal, Holocausto, and Dorsal Atlantica thrive in the cult corners of the thrash connoisseur's memory, and if he's got half a clue, then so does the Mist. This is one of the most underrated bands of its time, having written the great debut Phantasmagoria. However, I have always held this sophomore album as my favorite: a polished gem of aggressive technical thrash metal with more quality mosh than you can muster in a single listen.

These Brazilians were notable for the rather dark, horror-inspired fairy tale style of their imagery and music. Most thrash/speed metal bands of this type were singing about nuclear war and religion, but The Mist specializes in fare like "My Life is an Eternal Dark Room", "Peter Pan Against the World" and "God of Black and White Images". There is also a lot of progression and mild experimentation in their work. Never afraid to use elements like synthesizers or acoustics if it fit the mood. The Hangman Tree is a beautiful album, ranging from the flowing and catchy speed of "The Hell Where Angels Live" to the brooding and slower paced "My Pain". I know it sounds pretty emo, but it's not, it's an intense and nearly flawless album of introspective, gloomy thrash metal.

Production on the album is dense and effective, and the songs fit together into a cohesive and memorable mold. The vocals are emotional and tortured but still throaty enough to please fans of Sodom or Motorhead. Riffs are melodic when needed and technical when they want to be. This was one of the best Brazilian thrash metal albums, and one of the best of the 'late period' in Golden Age thrash (1990-93) when grunge had all but taken over. It may have re-awakened in full force now, but albums like this are still difficult to come by and even harder to surpass.

If this album went under your radar in those days, or you'd like a glimpse into what the rest of the Brazilian cult thrash scene outside Sepultura was like, track this down. If it helps, they featured former Sepultura guitar player Jairo Guedz.

Cool, Jairo had a really great sense for dark riffs. Thanks for pointing this out, hadn't heard about it.

Going through some Sepultura albums right now to get ready for the reviews.