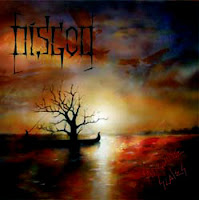 Disgod arrives on the scene with a debut full of aggressive, energetic death metal, well versed in old school sentiment, yet unrelenting, fast and snappy enough that a more modern audience might find something to appreciate with it. There are a dozen tracks on the album, many hovering around the 2 minute mark.

The band is a three-piece, with SP handling the guitars and vocals. He's got a very blunt delivery which reminds me of a lot of thrash and crossover, in particular early Prong. The thrash influence also appears heavily throughout the compositions, you can hear that proto-death metal influence of bands like Possessed as well as the grinding death of Napalm Death. It all adds up to excitement, for a great number of the tracks here will you have smashing your head against the nearest solid object or structure. "Undercover Enslavement", "Stabbing With a Nail", "Mirror of Mors", "To Shoot to Be" and "Sharp" are all total death thrashing slugfests which race past you in a flurry of blows. There is nary a weaker track on the entire album, even if none of them are outstanding.

The production is punchy and punctual for these brief bursts of chaos. The bass thuds and races below the twisting, spitting guitar licks and the constant shuffle of the drums. The band is by no means 'messy', but if you like your death metal with a dose of crossover splatter influence, Disgod are a band that should please you.