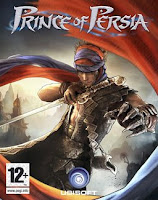 The newest entry to the revived Prince of Persia franchise continues the adventures of our intrepid Prince. This time he’s walking in a desert, looking for his lost donkey, and gets swept into preventing an ancient god of evil trying to escape from his prison.

For those unfamiliar with the series, the Prince of Persia games follow the Prince, a veritable master of swordplay, acrobatics and parkour, and an uncanny knack for disturbing gods, demons and messing up the timeline. The games consist mostly of puzzles, 3d-platforming and adventuring, relying on fairy-tale Arabia for the flavor of the story and the surroundings.

Like always, the series tries to re-invent itself in each of its iterations. There are some welcome additions, and some … less welcome. The game itself is very pretty. I mean it when I say pretty. This game is bloody gorgeous. The graphics have been cell-shaded, and combined with a bit of Final Fantasy-esque graphic design this leads to a result that could be straight out of a painting in a story-book. Not to mention very pretty. However, in my personal opinion, they may have gone a bit too far in the design department, when coming up with the designs for many of the buildings in the game. Suspension of disbelief is all well and good, but at least in the previous games the impossibly tall towers were usually based on a cliff or some relatively stable platform. This time, many of them are basically perched on top of stone matchsticks, couple hundred meters long. This is not a massive problem, as I didn’t exactly go into the game expecting superb realism and grittiness with brown and grey textures. In fact, POP takes exactly the opposite course, and this is refreshing. However, part of the charm of the previous games was that the Prince was a relatively normal(at least compared to all the others he met in the games) bloke, trying to survive in world-ending situations. He could do crazy acrobatics, but he was still relatively gravity-bound. This time any pretension of adhering to the laws of physics has been chucked out of the window. This leads to very pretty combos in combat, and makes scaling the impossible routes in the game possible. However, it’s just not as satisfying to scale insane obstacle courses with a guy who defies gravity, than it is to do the same with a very skilled, if fragile acrobat.

One major change in the game is the automation of the time-rewinding tactic present in the previous titles. It’s basically no longer possible to die, as Elika, your companion in the game, pulls your arse out of the fire the moment you would actually die. This helps with those people who aren’t very good at games, and removes much of the frustration of saving and loading present in many games. Still, the game as a whole is relatively easy, and at times it feels like it’s railroading the player. The possible routes to move around the environment are marked in various ways, be it scratches or vines, not to mention pressing a button shows you the way to the next chosen area. This takes much of the free-form puzzle platforming of the previous titles away, and feels less satisfying than finding your own way. It’s still bloody good fun to see the Prince run around the walls and whatnot. This same problem occurs in the combat. Instead of the free-form-use-the-environment-and-whatever-you-want combat of the previous titles, the Prince is now reduced to blocking and shuffling around, until you can pull off a pretty combo to damage your enemy. One issue I had with the combat was the prevalence of quick time events, at which I’m pretty terrible. Nothing is quite as annoying as spending a minute or two grinding down your enemy’s health, just to fail a quick time event and Elika saving you, just to see the enemy’s health bar recharge due to this. 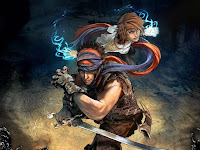 The game has taken a step from being fully linear, to presenting you all the levels in the game, to do in whichever order you choose. This however, leads to many levels being very similar, and loses some of the charm of discovering new and radically different places. The story isn’t terribly complex, but it never was in the previous games either. The dialogue between Elika and the Prince is sometimes funny, sometimes cringe-inducing in all its wittiness, but nevertheless I did warm up to the characters over the course of the game. The meat of the game is in the platforming, as always. It’s just too bad that while it’s been expanded, the aspect of finding your own way has been neutered along the way.

Overall, the new Prince of Persia is a worthy addition to the series, and great fun to play. It’s just not as good in some aspects as its predecessors. It’s still very pretty.

Honestly, every mention of the combat in this game just turns me right the fuck off. Quick Time Events were fun in God of War, and haven't been fun in any game since.

Yeah, I think the combat is a big step back from previous games. Sure, you can pull insane gravity defying stunts and stuff with the quick time events, but it takes away all the freedom and the satisfaction of pulling off a really awesome combo in a free-form combat situation, 'cause then you'd know it was your own achievement. Mostly, I tried to just finish the combat parts as quickly as possible, and get on with the acrobatics.