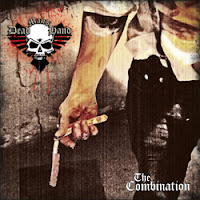 This is the debut of the thrashing Norse death metal squad Dead Man's Hand. On offer are 10 tracks of mid to fast paced thrashing speed with some melodic death metal influence, in particular the vocal style of Dag Carlsen. While it's not quite impressive or original, the album is a solid enough fist to the face that fans of rocking bands like The Haunted, At the Gates, Carnal Forge or the more modern Slayer riffing will get some kicks from it.

The real focus here is the unending thrash onslaught of guitarists Jon Carlsen and Martin Kandola. They weave some fun rhythms during the faster material, though the breakdowns are often underwhelming. Some of the better songs on the album include "Capaci Bomb", "Hostile Respect", "Castigate", "Taste the Metal" and "Knuckledusted". I enjoyed all these tracks, but there others like the Pantera-styled intro of "The Last Stand" which were somewhat of a turn-off. Usually even these songs pick up for a few riffs though. I'm also not thrilled by the vocals, they alternate between a melodeath snarl and a straight up death growl. Neither of these is especially bad, but the vocal patterns don't really do a lot of justice to some of the tracks.

The album has a good tone to it with the crisp and cutting guitars. The bass hovers somewhere lower in the mix and isn't much of a presence for many of the songs. The band cites a pretty wide array of thrash and death metal influence, but I found myself associating this with a less exciting version of The Haunted or Carnal Forge. If you lap up releases by those bands, then you may want to give The Combination a shot, you'll probably get more out of it than I did. They're not a bad band by any means.