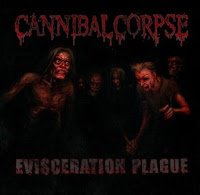 With a career now more than 20 years deep, Florida's most enduring and consistent death metal band returns with its 11th full-length album, losing none of its energy and not once deviating from its traditional blend of technical riffing, bass savvy and violent resonance.

How you feel about this album will largely depend on which 'camp' you are in: if you favor the Chris Barnes era of Cannibal Corpse, it's possible you will once again whine about how it's not this or that. If, like myself, you feel the more recent stretch of George Corpsegrinder-fronted albums (dating back to Gallery of Suicide; Vile was mediocre) marks not only the band's career high but also one of the most consistently excellent periods in any death metal body of work, then you will once again be delivered unto gore soaked euphoria by the Evisceration Plague. It's a little better than its predecessor K.I.L.L., in terms of quality.

"Priest of Sodom" opens the album with a many-fisted beating, a blasphemous curb stomping with punchy riffs and those evil octave chords these Florida bands like this use so well (Morbid Angel is another). "Scalding Hail" is short but sweet, and by sweet I mean it will kick your fucking head in, but in less than two minutes. "To Decompose" is one of my favorite tracks on the album, that opening riff just immediately takes me back to what I goddamn loved about an album like Bloodthirst, technical yet still extremely catchy and, in the interest of all the best death metal, DISGUSTING. "A Cauldron of Hate" can be felt wrenching straight to your gut, about to empty your stomach of its contents and then jerk the stomach itself right through your abdomen. "Beheading and Burning" makes use of evil chords under flighty grinding death metal riffs for a truly terrifying and paranoid atmosphere. Incredible. "Evidence in the Furnace" is a bloodwash of off-point open speed and chugging arson. "Carnivorous Swarm" paints its insectile antagonists through a creepy, quick rhythmic patterns. The title track is plodding and groovy, and you just won't believe some of the incredibly evil solos they put over the rhythm as the track just rocks out. If this one doesn't have your fist beating you are probably not a death metal fan. "Shatter Their Bones" will 'eat your fucking guts and your brains'. "Carrion Sculpted Entity", aside from having the best title, has Alex Webster written all over it. Absurd. "Unnatural" is another of my favorites for the new album, the riffs are just amazing from the busy blasting shuffle of the verse to the claustrophobic order of its bridge. "Skewered from Ear to Eye" closes off the album just as consistently as anything that has come before.

As usual, the musicians are on top of their game. Guitars are sick, bass is unbelievable and the drumming is rock solid through each shift of rhythm and intensity. Corpsegrinder's vocals are perfect in this setting, not so gurgly and brutal that they distract you from the wealth of busy brutality going on beneath them, and rhythmic enough in their own right that they can be quite catchy. The mix sounds fantastic.

Florida death metal is...unhh...alive! Listen no further than this album for the proof. If you think Cannibal Corpse is some washed up band, think again, because they are continuing to create their best work, among the best in death metal today. No excess wanking. No failure to deliver a beating. No losing track of the fact that good death metal must convey fear and horror through its music rather than artificial measures of 'technical' excess.

Why are you still reading this? Money well spent, so do it already.

Thank you auto for once again giving me new music to slowly kill my hearing one brutal beat at a time.