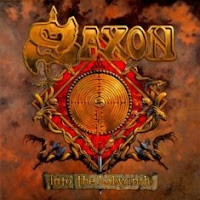 Throughout the 30+ years of heavy metal's existence, few bands can be said to have 'kept it real' as much as the mighty Saxon. True to their roots, rarely deviating (they may have added a 'power metal' touch to a few of their 21st century albums, but then, they are one of the bands to inspire that entire genre in the first place), the final product is almost always one of high quality. Into the Labyrinth is the band's 19th studio album and it delivers in spades. This is pure Saxon, with a balance of their old school, hard rocking tunes and a few that will appeal to the more modern crowd.

The first thing one will notice is the HUGE sound of this album. Boasting a Charlie Bauerfiend production, Saxon has never really sounded this good in the studio before. The vocals are giving such a great depth, and the guitars are excellent. Opening track "Battalions of Steel" is an epic leaning in that more 'power' metal direction they have used on recent albums like Metalhead. Soaring vocals, simple yet effective riffs, and keyboard choirs deliver the goods, with a mighty chorus. "Live to Rock" pays tribute to all their old 'rock' titled songs, a very simple NWOBHM number reminiscent of older Priest, AC/DC and...Saxon! It's damn catchy. "Demon Sweeny Todd" is a faster tune based on the notorious folk character who has recently been revived in film. "The Letter" is a rarity, a pure acoustic track, quite nice. "Valley of the Kings" is one of my favorites here, a rousing, mid-paced melodic speed metal with an amazing bridge and chorus. "Slow Lane Blues" and "Crime of Passion" are grittier, bluesier, down-and-dirty metal tracks. "Protect Yourself" is a catchy slower track, not quite a power ballad but bordering on it. Another of the best tracks is "Hellcat", totally rocks.

The album is very consistent, and it should appeal to fans of the band from all periods. It's not nearly as good as last year's The Inner Sanctum, but considering just how damned good that album was, it would be a difficult act to follow. Regardless, this album has its share of classic Saxon tunes, simple and to the point, and proves just how much life is left in these veterans. They may never have been the darlings of NWOBHM when stacked against an Iron Maiden or Judas Priest, but we all know who is writing better albums today.