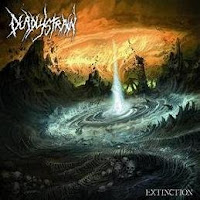 After a few demos, this is the first EP release from a young Italian death metal band. They play a very straightforward style, with the influence of bands like Morbid Angel and Cannibal Corpse. Though they incorporate some slow-down and groove, it's usually done to offset the faster material rather than to create slam parts. At first I wasn't feeling the EP, in particular due to its very rehearsal like sound, but in the end it wasn't so bad. With some better production these songs could be decent.

There are five tracks here, beginning with "Life Reject", a faster song with a few trade-off riffs. "Brainwreck" starts off with some great drumming and then into a blasted chug section. "Extinction" follows the same pattern, but has some slower breakdowns. "Shapeless Terror" has some early Cannibal Corpse sounding guitar wails and trills. "Drowned by Obscurity" also reminded me of Corpse, and not in a bad way. The drums are really the star of the show, mainly because they seem to be most prominent in the mix. The guitars and bass are audible, and the vocals are fine, but the drumming is just intense.

So there's really nothing special about the EP, but there's also nothing bad about it. It sounds like your average underground production in the brutal death metal field. To really judge the band I'll have to hear a bigger studio album where the guitars could shine more. They seem like they have the riffs and the talent. Also, I though the cover art was pretty cool.